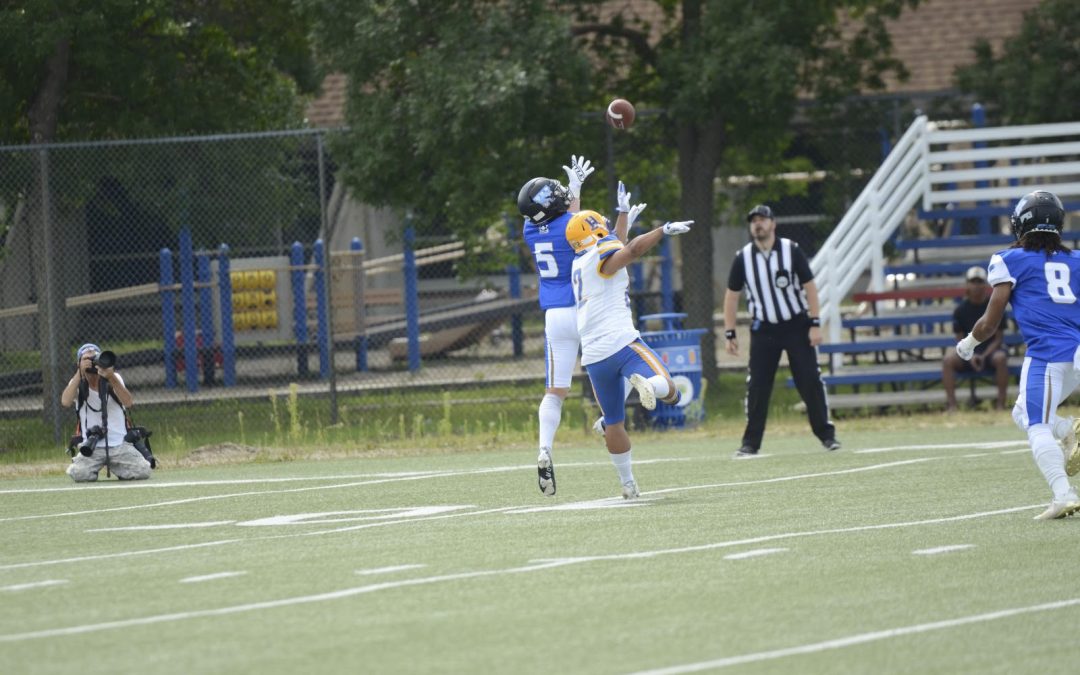 It was a memorable afternoon at East Side Eagles Field on Sunday, as the Winnipeg Rifles knocked off the No. 2 nationally ranked Saskatoon Hilltops 19-16. It was the first victory for the Rifles over the 22-time Canadian Bowl champions since 2006, and first in the seven-year tenure of head coach Geordie Wilson.

The win came two weeks after a spirited affair in Saskatoon, where the Hilltops held on for a 19-10 win, and a week after a nail-biting two-point loss to the defending PFC champion Regina Thunder.

“We’ve been building to this. You could see it as we’ve been going. Towards the end of last year
and then as we came out of the gate this season,” Wilson said.

“You could see that we were ready. We just had to learn to make plays and to not make
mistakes at the wrong time. That’s kind of what we did the last two games. This time we
finished them off. I’m super proud of these guys and our coaches and our board of directors.
Everyone has done something here.” 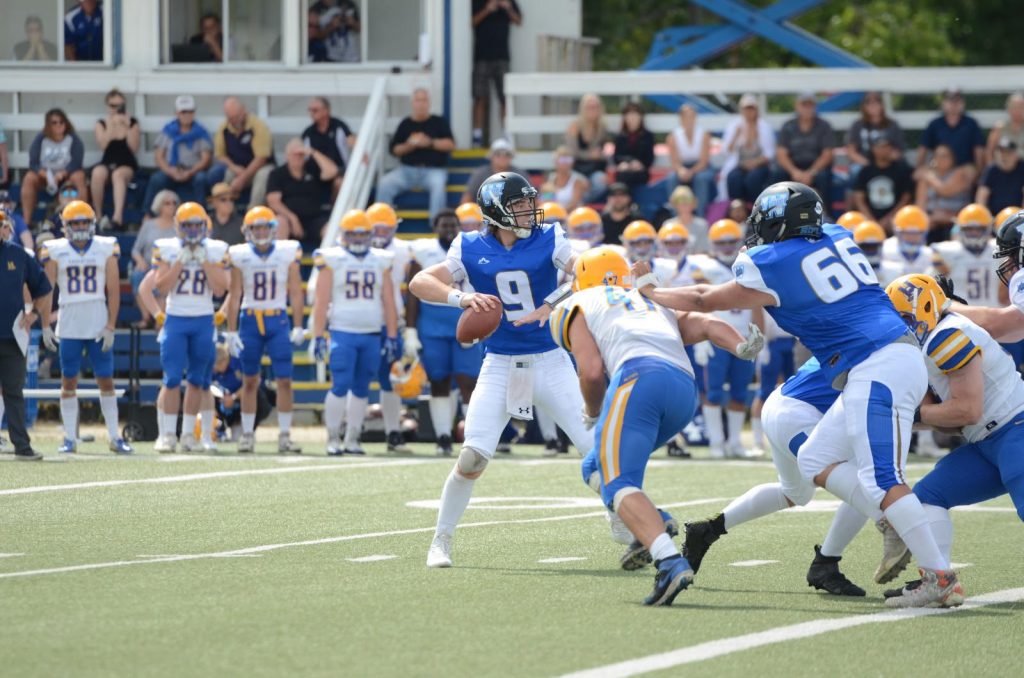 Quarterback Bryson McNeil, in his second year with the team and final season of eligibility, led a versatile attack through the air, finishing with 295 yards on 26 completions. Through three weeks, he leads the CJFL with 940 passing yards, as well as completions with 73.

Defensively, dimebacker Brandon Kamenz continued his All-Canadian calibre campaign with an interception, while the Rifles’ defence forced five turnovers overall. Perhaps the biggest of those came with five minutes to go and the game tied at 16, as 2021 top rookie Cade Lerm used his 6’4” frame to punch the ball out, and Wyatt Richards recovered, putting a halt to a Hilltops drive that was entering Rifles territory.

Winnipeg led for the entire first half, entering halftime up 13-10, as McNeil went 15-for-21 for 187 yards through two quarters. Winnipeg’s lone major came on a rushing touchdown from six yards out from receiver Adam Fast, a former Carleton University commit and Kelvin High School product, is debuting with the Rifles this season. Fast put his body on the line to score, deflecting off of two Hilltops in mid-air, spinning to find paydirt. Fast led the team in receiving yards, with 94 while eight different receivers caught a pass, including Aidan Avanthay, whose 36-yard over the shoulder catch put the Rifles in field goal range on their game-winning drive.

The Hilltops pushed back in the second half, using the momentum of a late second quarter major to take a 16-13 lead with 11:15 to play. They were led all game long by running back Boston Davidsen, who had 168 rushing yards and a major on 27 carries. McNeil went to veteran Everett Findley shortly after, finding the former Garden City standout on two huge gains to the Hilltops 30. Findley finished with six grabs, his most as a Rifle over two seasons, as well as 59 yards. Kicker Donovan Downing drained a 35-yarder shortly after for his
third of four field goals on the day.

Downing played a huge factor on the next Rifles drive, blasting a punt that went all the way to the Hilltops six. Winnipeg’s defence forced a two-and-out and McNeil found Avanthay a few plays later on the near sideline to set up the game-winning field goal from ten yards out.

“I saw my dude getting open in a one-on-one matchup. I wouldn’t test us one-on-one any day.
It’s trouble coming for you,” McNeil said.

“Shout out to Avanthay, way to go make a play. Shout out to the rest of our receivers and
offensive line. They stepped up today and the running backs all got work. We’re rolling man, I’m
jacked up.” 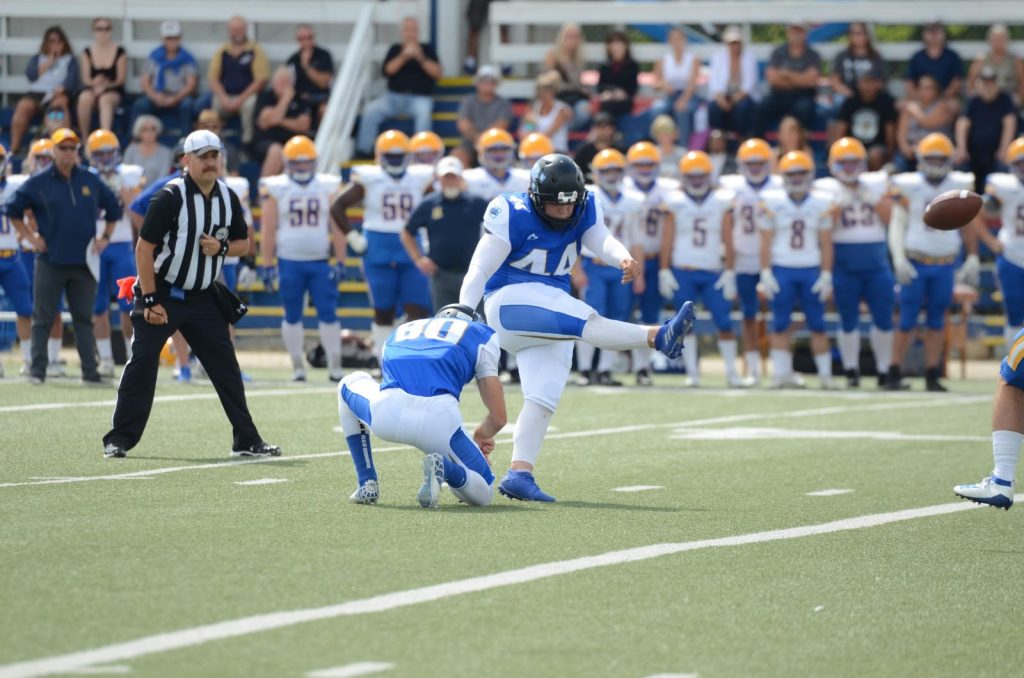